ANOTHER SUCCESSFUL DAY!  A report from Maeve Murphy 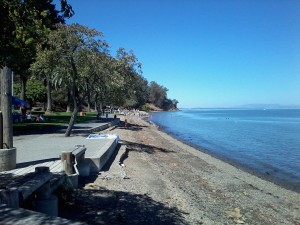 Coastal Cleanup Day dawned bright and warm at McNear’s Beach in San Rafael, Green Sangha’s adopted clean-up site. We were not short of enthusiastic volunteers ready for a day with friends, family, and teammates to improve their environment and earn some community-service credits for school. As ever, the McNear’s rangers were welcoming and helpful, providing plenty of buckets, bins, and litter-pickers to make our job easier. 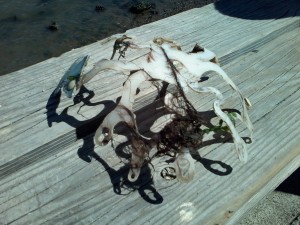 Eighth-grader Ruthwik had picked Coastal Cleanup Day for his school’s community service program. He and his dad made an efficient team, coming back with full buckets halfway through the morning and then heading out for more. Their red shirts were easy to spot far down the beach as they combed the rocks and sand. They scored the ‘most unusual item of the day’ – a seaweed-draped plastic frame inside a bicycle helmet – fitting for bike-loving Marin. Volunteers enjoyed its uncanny resemblance to an octopus or squid, with ‘tentacles’ splayed. Perhaps the creative minds at California Coastal Commission would like to use our photo for inspiration in a future outreach campaign, as a fitting visual which makes connections on several levels. 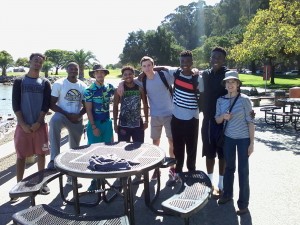 We were also joined by the Dominican University men’s basketball team and one of their coaches. During orientation they accurately guessed the number 1 item collected in past clean-ups: cigarette butts, which, sadly, still plague our environment in large numbers. These easy-going athletic guys covered lots of beach and by noon had mastered the art of the ‘small stuff’ – those tiny bits of plastic that are most likely to be missed in other routine clean-ups and can end up far out at sea, absorbing water-borne toxins and/or in the belly of some unfortunate marine creature. 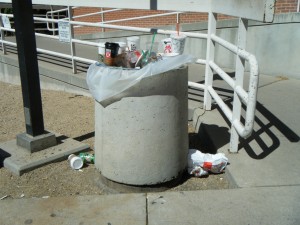 An important goal of Coastal Cleanup Day is to connect people and communities with their coastlines. It’s an opportunity for local volunteers to show their respect and love for our Bay and its beaches – and to put those sentiments into action. While reviewing what the basketball team had collected I invited their thoughts and impressions of the morning’s efforts and one young man reflected, “I’ll never litter again.” Though the remark earned him a gentle ribbing from his teammates (“of course you shouldn’t litter!”), it made my day – a major score for mindfulness in action. This is what it’s all about. 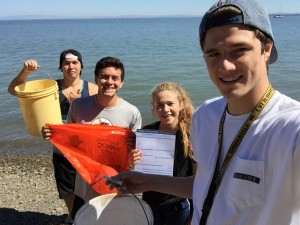 Another group of young friends, also from Dominican U, arrived just a few minutes before the official end of the day at noon just as I’d begun to tally the results. They set out energetically and 30 minutes later, while I was still counting, arrived back with two buckets full, adding a couple of pounds to our collection. That’s efficiency for you!

One surprise for me was the conspicuous lack of polystyrene or Styrofoam – always a prominent item in past clean-ups – in our tallied results. What could this mean? Are local bans on foam food packaging actually having an effect? It will be interesting to see what state-wide Coastal Cleanup Day results show.

In total, we relieved the beach of 10.5 pounds of garbage (including more than 90 cigarette butts!) and 6.5 pounds of recyclables, dispatched at the end by the appreciative rangers. Great job, everyone! 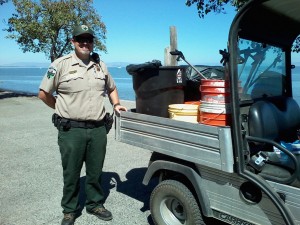