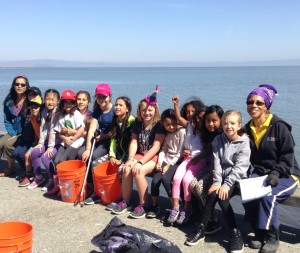 We had a strong turnout for the 31st annual Coastal Cleanup Day. Our 20 keen volunteers, just about the right number for this smallish site, were part of the biggest litter cleanup event in the whole world: 65,000 strong last year in California alone. Park rangers Kevin, Sara, and Justin greeted us warmly and helped us out by providing plenty of buckets and litter pickers.

Volunteer Nancy had arrived early and got a head start, covering a large area and pointing out spots that needed more help. Girl Scout Haley arrived sporting a festive birthday hat and Mardi Gras-style necklace; what a lovely way to celebrate her special day. She was soon joined by the rest of her troop, along with some Brownies, and they efficiently organized themselves into teams. Two Dominican U students, who are studying how trash travels down waterways, arrived in flip-flops for a morning of beach-combing and community service.

One Girl Scout mom, who has taken part in cleanups at McNear’s for years, reported far fewer discarded plastic bags than she ever used to, surely proof that the various bans and actions by the County, business, and advocacy groups such as Green Sangha are having a significant effect. Later, reviewing our data cards, I noticed far fewer polystyrene bits recorded than in years past. Could this especially problematic form of plastic also be slowly on its way out?

The California Coastal Commission encourages volunteers to bring their own cleanup supplies and reusable drinking-water bottles. Those of our volunteers who hadn’t brought their own were provided with bags and gloves saved from past years, so not one new plastic bag or glove was used. Between us we relieved the beach and picnic area of 12.5 pounds of trash – most individual items being plastic, no surprise there – and 9 pounds of recyclables, 21 pounds in all. That figure will be added to the California Coastal Commission’s database and analyzed, helping inform future educational and policy efforts. 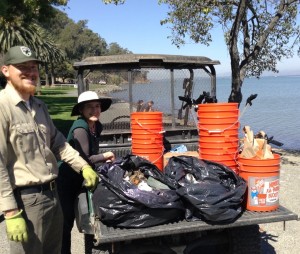 McNear’s beach is pretty well cared for by the rangers, but it’s an ongoing job to keep on top of the litter and they report that “there’s always more,” whether blown in by wind, dropped by picnickers, or washed ashore by tidal currents.  So they were grateful for the extra help today.  One item they’d love to see far less of is those plastic drinking-straw wrappers that come with juice cartons.  Hmm . . . an item for future ban efforts?

I spotted quite a few of our volunteers at the post-cleanup barbecue generously provided by the Lion’s Club for all Marin CCDay volunteers at CCDay headquarters at the Bay Model, Sausalito.  The Ben and Jerry’s non-dairy ice cream was delicious – and by choosing a cone instead of a paper cup and plastic spoon, my treat produced no additional waste.  As I licked my cone and enjoyed the harbor view, I reflected on how satisfying it felt to be part of a positive community effort to deal with our trash and help beautify our world. 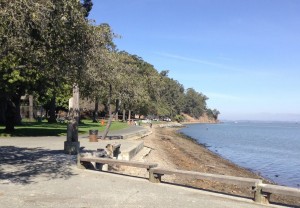