Do you want to cut your costs while helping the environment – saving energy and water, while reducing your carbon emissions?

Affluent Bay Area lifestyles would require FIVE EARTHS if everybody lived as we do. 60% of local carbon pollution comes from our household decisions: driving, home energy and water use, and the waste stream from our purchases.

Sign up for Resilient Neighborhoods to learn how to cut carbon and save money, while having a good time! Friends and neighbors come together for 5 meetings to calculate their carbon footprints, discover ways to conserve and upgrade their energy profile, and share successes.  The program manual, program leaders, and fellow participants help you every step of the way.

In the 7 years since the program began:

Over 5 meetings, you will:

About the founder and director

Tamra Peters has been working to protect the environment since the first Earth Day in 1970.  She began with 11 years of service at Nature Conservancy.  As National Director of Training and Volunteer Development, she oversaw programs for 5,000 volunteers and 30 chapters nationwide.  After moving to San Francisco in 1981, she worked for several environmental organizations, including Peninsula Open Space Trust, NRDC (Natural Resources Defense Council), and Rainforest Action Network.

After moving to San Rafael, Tamra developed an emergency preparedness plan adopted by the Gerstle Park Neighborhood Association.  In 2006, she began organizing events to raise community awareness about sustainability and climate change, and in 2007 joined the board of Sustainable Marin.  Since 2010, she has been working 20-60 hours per week on the Resilient Neighborhoods program, a collaborative effort of Sustainable Marin, the City of San Rafael, and the County of Marin.

For more information about Resilient Neighborhoods and Tamra, click here.

Why it matters
In May 2013, atmospheric levels of CO2 reached 400 parts per million (ppm).  During earlier geological periods when the CO2 levels were above 350 ppm, the polar ice sheets did not exist (Hansen, 2010).  We are witnessing significant ice melt already.  As of 2010, the rate of ice mass loss in the Antarctic exceeded 24 cu mi/yr.  In Greenland, it was more than 48 cu mi/yr.  This ice loss from Greenland alone is equal to roughly 162 million acre feet, or more than 10 years’ worth of Colorado River flow – enough to provide water to more than 1.3 billion people for one year.  One result:  sea level has been rising at the rate of 0.68 inches per decade.  Since 1993, satellite readings indicate an even faster rate of 1 inch per decade (Gorntiz, 2007).

Climate change isn’t about the future.  It is happening already, right here at home. The consequences will be devastating for our children and their children unless we act. Join the movement for a climate-wise future today!  Resilient Neighborhoods. 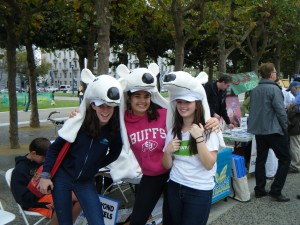 “The potential for reducing carbon emissions through behavioral change at the household level is sufficient to yield a major effect on national emissions if well-designed interventions are scaled up nationally.” – Paul C. Stern, National Research Council (Contributions of Psychology to Limiting Climate Change (2011). American Psychologist, 66, 4: 303-314)