Do we need to save electricity?
Current usage: While the population of the United States has expanded 89 percent over the past 50 years, the amount of electricity use has grown 1,315 percent. Per-capita consumption of electricity in 2000 was more than seven times as high as it was fifty years ago. The Energy Information Administration’s Annual Energy Outlook 2001 report predicts that the US’s near-term energy future will include greater consumption, productions, and imports.

Is this a problem?
Yes. The United States was self-sufficient in energy until the late 1950s when energy consumption began to outpace domestic production. From 1970 to 2000, U.S. energy consumption grew 45 percent while production rose only 13 percent. The Nation imported more energy to fill the gap: in 2000 US petroleum imports reached an annual record level of 11 million barrels per day. Heavy reliance on fossil fuel energy imports has economic, political, as well as environmental implications. The Annual Energy Outlook 2001 report projects U.S. energy-related carbon dioxide emissions to exceed 2 billion metric tons of carbon in 2020, 33% more than in 2000.

Are we currently wasting electricity?
Yes, we are wasting electricity in our homes by using inefficient light sources. Lighting represents as much as 25% of our home’s electrical use. We are lighting our homes inefficiently by continuing to use incandescent light bulbs (the same technology developed by Thomas Edison in 1879!). More than 90 percent of the energy produced by incandescent lights is heat, not light.

What about halogen lights?
Standard halogens are modern versions of Edison’s incandescent bulb, and they last longer – 2,250 to 3,500 hours. Yet, most people use much more wasteful high-wattage halogen tubes in their homes. Free-standing torchiere lamps use either a 300- or a 500-watt halogen tube that wastes energy by creating four times more heat than the average incandescent bulb. A 500-watt halogen reaches temperatures of over 1,200 degrees – creating a serious fire hazard. New, energy-efficient torchieres use compact fluorescent bulbs and provide 25% more light than popular halogen torchieres and use one-fourth the energy. The new compact fluorescent torchieres are also far safer than the halogen torchieres because they do not operate at the same high temperatures.

Will my compact fluorescent bulbs make a difference?
Yes. Residential use of electricity is greater than either commercial or industrial use. A single 20-watt compact fluorescent lamp used at home in place of a 75-watt incandescent will save about 550 kilowatt-hours over its lifetime. If your electricity is produced in a coal-fired power plant (like 20 percent of California’s electricity is), that savings represents nearly 500 pounds of coal not burned, which means that 1,300 pounds of carbon dioxide and 20 pounds of sulfur dioxide will not get into the atmosphere.

Get 100 homes to switch to electricity saving compact fluorescent bulbs and Save 55,000 kilowatt-hours of electricity
Prevent 132,000 pounds of carbon and sulfur dioxide pollution

Where do I get it and how much does it cost?
Compact fluorescent bulbs can be found at your locally-owned hardware store. The price of a 75-watt equivalent flourescent bulb can range from $5.00 – $9.00, depending on the brand. A new generation of compact fluorescent bulbs now meets the stringent criteria for long-life and energy savings set by the federal government’s ENERGY STAR program. Check for the Energy Star label to help you select a bulb brand. Retailers of Energy Star products often offer promotions, discounts, and rebates on these items.

Remember that, while these lights are more expensive than incandescent bulbs, they will last over ten times as long (10,000 hours vs 750 hours)! The purchase is cost-effective: With the compact fluorescent bulb you will save a total of $20.50 over three years (through electricity cost savings and bulb replacement savings). If you replace 25 percent of the lights in high-use areas with fluorescents, you can save about 50 percent of your lighting energy bill.

2015 update
“If every American home replaced just one light bulb with one that has earned the ENERGY STAR,” says the US EPA, “we would save enough energy to light 2 million homes for a year, save about $460 million in annual energy costs, and prevent 6 billion pounds of greenhouse gas emissions per year, equivalent to the emissions from about 550,000 cars” (https://www.energystar.gov).  Let’s change our light bulbs now! 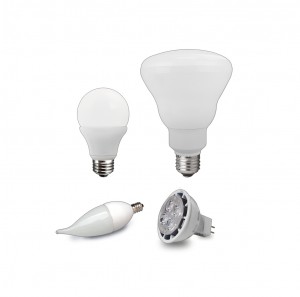 What else can I do to save electricity?

Excerpted and adapted from the following websites:

To find out more about how consumers and communities can obtain the information and services they need to control energy costs, see the Community Energy Cooperative’s website:
www.energycooperative.net