Have you heard of the book by John Francis, PhD, called Planetwalker: How To Change Your World One Step At A Time?  In 1971, John lived in Inverness, CA.  Like so many coastal residents, he was deeply disturbed when two oil tankers, the Arizona Standard and the Oregon Standard, collided beneath the Golden Gate Bridge, spilling 840,000 gallons of oil into the water and onto the shores. He joined hundreds of volunteers trying to clean the beaches and save marine life.  He wanted to respond in an even deeper way, and decided to stop riding in motorized vehicles. Our cars, after all, were the machines that had led us on the path to the oil spill and so much other pollution.

John’s friends tried to persuade him that his symbolic action would make no difference. He argued with them, but did not like the way he felt after these arguments.  So he decided to keep his mouth shut for a day, and then another day . . . He felt so much better, and found such peace in communicating non-verbally, that he maintained silence for 17 years (with a one-hour hiatus). When he was accepted to graduate school in the Midwest, he wrote back to request a delay in matriculation, since he would have to walk to get there.  As a graduate assistant, he led undergrad seminars without speaking.  Discussions were so lively that there was a waiting list to join his section.  Having mastered the art of silence, he now speaks beautifully. 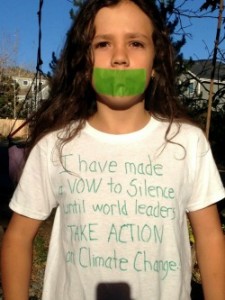 I thought of all these things when I read this week about an even younger environmentalist, a Native American boy named Itzcuauhtli, who in October took a vow of silence until world leaders do something real about climate change.

On December 10, we will be joining people all over the world, observing 10 minutes of silence in solidarity with this 11-year-old activist.  You may do so at any time of the day, but we especially encourage you to take silence at 3:50 pm PST – a reference to the upper acceptable concentration of carbon dioxide in our atmosphere (350 ppm) and to the group that has done so much to raise awareness of this issue, 350.org.

Here is more detail from one supporter: An 11 year old indigenous environmental activist has taken a vow of silence until world leaders finally act to effectively deal with climate disruption. This young man is not just any 11 year old. He and his 14 year old brother are well-known eco-hip-hop artists who perform at events around the world. In just a few weeks his creative approach to his spiritual despair has impacted tens of thousands of people. And in my imagination, it could blossom into a heartful global shock-wave of silent children, upending business as usual everywhere – as was envisioned by a 1987 political fantasy movie….