Last week, I wrote about PVC and the CHEJ guide to a PVC-free lunchbox. Beth Terry, who writes for the blog www.fakeplasticfish.com, also recorded her thoughts, all reprinted below. I think you’ll find them worth reading.

The Center for Health, Environment, & Justice has released its Back-to-School Guide to PVC-Free School Supplies today. It’s a free downloadable guide to all the products kids might need for school, from binders and notebooks to clothes, electronics, lunch boxes, and a host of other products. It includes a comprehensive guide to suppliers as well as general rules to keep in mind.

So what’s wrong with PVC?

I’ve ranted about PVC products quite often on this blog, but in case you missed those posts, here’s a quick summary:

1. PVC is the only major plastic that contains chlorine, so it is unique in the hazards it creates. During production, PVC plants can release dioxins which harm workers and community members who live nearby. According to pvcinformation.org, residents of Louisiana, which is home to half the PVC production facilities in the USA, have been shown to have much higher concentrations of dioxins in their blood than the average U.S. citizen.

2. The plasticizers used to make PVC soft contain endocrine-disrupting phthalates which can leach from the plastic, especially when used in children’s toys and other products that may find their way into children’s mouths. A German study just released July 27, 2009 in the journal Pediatrics suggests that the use of intravenous feeding bags that contain the common phthalate DEHP might increase the risk of liver problems in premature babies. In fact, many hospitals have replaced the PVC tubing and IV and blood bags they use with less toxic alternatives.

3. Lead is used to stabilize PVC. According to Jennifer Taggart (The Smart Mama) in her comment yesterday about my PVC binders, PVC can also contain lead or cadmium. If the PVC is stabilized with lead, the lead is available for pickup at the surface – and can then be transferred by the hand to the mouth. In other words, lead can be ingested from a PVC lead-stabilized binder without mouthing. Lead doesn’t like being in the plastic matrix, so it migrates to the surface, particularly when exposed to heat and/or friction. Older PVC will have higher concentrations of lead. Having tested lots of binders now with my XRF, there is a substantial percentage that do have lead, but not all.

4. PVC is hard to recycle. According to ecocycle.org, because so many different additives are used to make PVC, recycling the plastic is extremely difficult, and any PVC bottles (#3 plastic) that make it into the recycling stream can contaminate and ruin a whole load of #1 bottles.

5. When incinerated, PVC forms dioxins, a highly toxic group of chemicals that build up in the food chain. When landfilled, PVC poses significant long-term environmental threats as chemical additives can leach into groundwater.

6. PVC gives off noxious gases in a fire. Greenpeace says that in a house fire, fire-retardant PVC will smolder for long periods of time rather than burn, “giving off hydrogen chloride gas long before visible signs of fire appear. Hydrogen chloride gas is a corrosive, highly toxic gas that can cause skin burns and severe long-term respiratory damage.” For this reason, the International Association of Firefighters is one of several organizations calling for a phase-out of PVC.

7. For much more information about the hazards of PVC and why we should avoid it, please check out CHEJ’s web site, PVC: The Poison Plastic.

And by the way, the drawing for plastic-free school supplies is still open and Sustainable Group has offered to donate three Back-to-School Kits! If the above information has caused you to rethink using those old PVC binders, feel free to leave a comment and enter the give-away. It will be open for at least another week. [Click here to go to this post on her website.]

Like I stated in that post, I generally believe that reusing the products we already have is the greener choice. But in the case of PVC, I’d rather encourage the development and manufacture of safer alternatives and send the existing PVC to the hazardous waste facility.

This post is part of Beth’s contribution to August’s Green Moms’ Back to School Carnival hosted by Organicmania.

Do you remember when lunch boxes were made of metal, or you simply carried your lunch in a paper bag? These days, kids everywhere seem to be carrying their lunches in plastic. Plastic lunchboxes are colorful, lightweight, and don’t rust.

Some plastic lunchboxes close tightly, making sure no liquid leaks out.

They come in all sizes, too, so you can customize the container for your child’s (or your own) needs on any particular day.

So why aren’t we celebrating? One word: plastic. Plastic lunchboxes are reusable, of course, but reducing waste is not the only issue when it comes to reducing plastic pollution.

The Center for Health, Environment, and Justice (CHEJ) just released their “Back-to-School Guide to PVC-Free School Supplies”: http://www.chej.org/publications/PVCGuide/PVCFree.pdf.
They point out that many of our children’s supplies, including backpacks and binders as well as lunchboxes, are made out of PVC (polyvinyl chloride). CHEJ calls PVC “the poison plastic” because it’s toxic in manufacture, in use, and in disposal.

Here’s what they have to say: “Cancer-causing chemicals that contaminate the air and water of surrounding communities are used to produce PVC. When PVC is manufactured or burned, numerous dioxins are formed and released. Dioxins are a highly toxic group of chemicals that can cause cancer, and harm the immune and reproductive systems. These and other toxic chemicals released during the PVC lifecycle contaminate our bodies and may pose irreversible life-long health threats.”

They go on: “PVC is unique among plastics because it contains dangerous chemical additives. These harmful chemicals include phthalates, lead, cadmium, and/or organotins, which can be toxic to your child’s health. What’s worse is the danger these chemicals pose — phthalates and other toxic additives can leach out or evaporate into the air over time posing unnecessary dangers to children. Over 90% of all phthalates are used to soften or plasticize PVC products.”

Wow! We’re making children’s daily articles out of materials that can leach harmful chemicals into the air or children’s food? Suddenly those brightly colored lunchboxes don’t look so cheery.

Like the smiling face of a character selling fast food (concealing the attendant high calorie count, low nutritional value, and agricultural pollution), the characters, motifs, and logos on our children’s articles begin to look less wholesome.

What can we use instead? The first and last technology will always be inspired human thinking. If we use our heads and our hands, we will surely come up with alternatives that are safe. But if you’re having trouble coming up with ideas in time for the new school year, do read CHEJ’s report: http://www.chej.org/publications/PVCGuide/PVCFree.pdf. It’s 13 well-written pages, with more background on PVC, and suggestions we could all use.

Here’s to a plastic-free world! 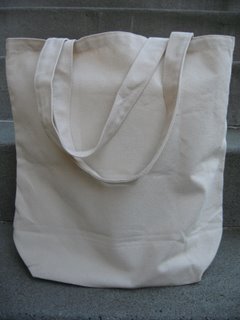