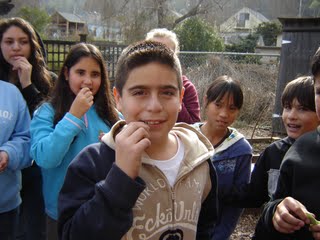 Rethinking plastics leads us back to our source of sustenance — a harmonious relationship with mother earth — and gardening is a doorway into that harmony. For this reason, I have been continually refreshed by my association with the Green Schoolyard program at Davidson Middle School in San Rafael, where my stepson went to school.

The aim of the program is to create a Garden where students can learn about the natural world, nurture living things, and reap the earth’s bounty. Although the Garden began within a circumscribed space, we find the boundaries transparent and often illusory. The Garden keeps slowly expanding into surrounding areas as we remove invasive weeds on the outskirts and infuse an ever richer variety of herbs, flowers, and shrubs.

The last school year, 2008-09, was especially busy and fruitful. The year ended with a climax when the 8th grade class donated $500 toward the purchase of fruit trees to go behind the Woodshop in a long-wished-for Haven.

If you have ever stopped by Davidson, you may recall how weed-infested the entry had been, even one year ago: 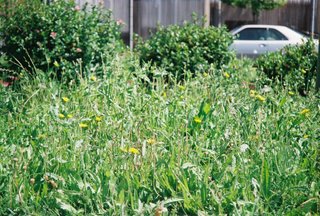 Then, the Davidson Dads organized a major overhaul, including upgrading and making more water-efficient the irrigation system, and installling a lawn by the office. The Conservation Corps joined in with great energy: 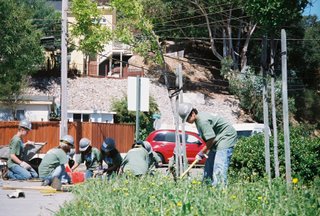 The smiles on their faces indicate the satisfaction they felt by making such a difference in the appearance of the school’s entry: 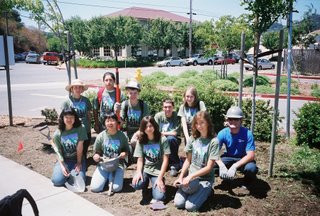 Classes in the Garden

* After occasional visits to the Garden in the fall, 6th grade science classes had a series of lessons this spring led by Next Generation garden educator Marijanna Shurtz. Teachers Bob Olson-Brown and Therese Hopkins helped their students plant seeds in their classrooms; many of those seeds are now thriving in the Garden. 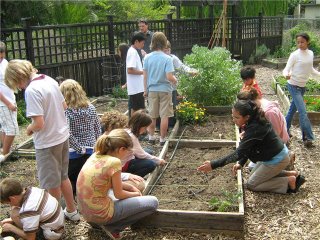 * Kimberly Pearson brought her 12 SDC students to the Garden all spring, as often as four days a week. They explored, planted, and tended the growing crops of spring.

* Josh Powell held drawing classes in the Garden to enliven his students’ palette of possibilities.

* Laura Edelen shared Poetry in the Garden with her 6th grade Core classes. This is the third year in which the Garden has been used as a place of poetic inspiration.

The Conservation Corps has cut great swaths of broom, fennel, and cottoneaster out of the Side Garden/Riparian Zone. We have yet to subdue the English ivy and pampas grass. Now, the Bay Institute has taken interest in our Riparian Zone, and has proposed a grant to complete the removal of invasives, plant native shrubs and trees (including some to shade the Band Room, reducing energy costs and carbon emissions), and possibly even restore stream flow by re-connecting to the original slough. Whatever measure of these dreams we realize, we’ll see a visible improvement to the look of this still too-desolate area of campus: 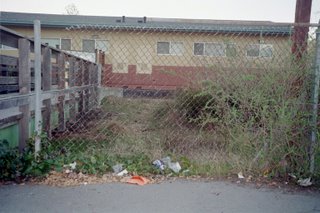 The proliferation of plastic litter on campus — by students, sports groups, and passersby — is the antithesis of everything the Garden is about. This year a team of students, parents, and staff worked together to move the campus closer to Zero Litter and Zero Waste. On October 10, Algalita Marine researchers Anna Cummins and Marcus Eriksen spoke to the assembled student body and showed pictures, videos, and actual relics from their travels across the Pacific Ocean to Hawaii. One of their exhibits consisted of plastic particles pulled out of the ocean by a surface trawl, just like the ones being shown by Algalita captain Charles Moore to our Governor and his wife: 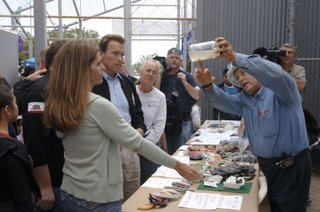 Conservative estimates in 2003 put the amount of plastic trash floating in the North Pacific Gyre at 3 million tons. Eighty percent of that litter comes from land-based sources. Anna and Marcus made that point vivid for our students. To follow up, this spring the DMS Science department hosted the San Rafael Clean slide show on How Litter Hurts in every science classroom. The students saw images of the growing mountains of plastic trash that are invading our soil and water. 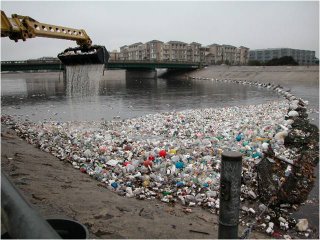 They learned, too, about the devastating effect of this litter on wildlife, such as the entanglement and starvation of an estimated one million seabirds every year. 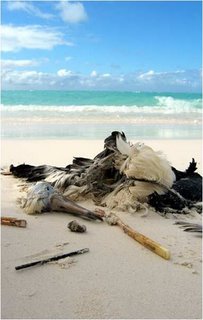 I was impressed by how many students seemed to resonate with the message of reducing litter and reducing waste. Two boys came up after one presentation to describe how they had personally helped extract wildlife — one, a seabird, the other, a baby seal — from plastic tangles.

We are not done with this project, but progress has been made. When I showed pictures of Davidson litter spots from Sep 06, such as the one below, very few of the students said they had seen it look that trashed this year.

We were especially fortunate to have Claire Brosnan, Sami Mericle, and Linnea Schurig as student representatives on the Committee to End Litter. We will miss them next year, but know that they will continue their work in community improvement at San Rafael High.

Two films came to my family’s attention this summer. Each tells a vivid tale of our relationship with nature and ourselves:
1. Food, Inc. Cinematically gorgeous, this film shows how industrialized agriculture has overtaken our economy, and the high costs we are paying for “cheap” food. The film will confirm every gardener’s instinct that you have, and may spur even further rethinking of your purchasing habits. You may also be inspired to start saving your bean seeds for the next year’s planting.
2. A Man Named Pearl. An unlikely title for an equally unlikely topic, topiary! This film chronicles the dedication of a man who, by transforming his property with breathtaking topiary, created a place of unusual beauty, improved racial relations in his southern town, and became an inspirational figure to young and old. We rented this film from Netflix, and it’s likely available elsewhere.