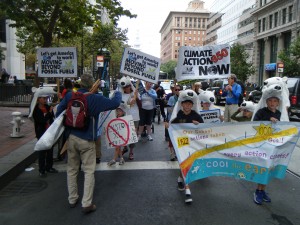 The People’s Climate March in NYC is expected to be the largest demonstration for climate action in history.  The march takes place just two days before President Obama and world leaders gather for an emergency Climate Summit at the United Nations.  Marchers are demanding leaders go beyond rhetoric and commit to bold action at the summit.
Green Sangha has several members who will be traveling by Amtrak on the People’s Climate Train from Emeryville to NYC.  The People’s Climate Train is being organized by Center for Biological Diversity in partnership with Buddhist Global Relief, Global Exchange, 350.org, Sierra Club, Avaaz and many regional grassroots groups.  More than 750 organizations around the world are supporting the People’s Climate March, from the largest transit workers union in New York City to a coalition of Buddhist monks.  In total, the groups represent roughly 100 million people worldwide.
Organizers are confident that the sheer scale and diversity of the People’s Climate March events, from the headline demonstration in New York City to the simultaneous events worldwide, will show politicians that there is a massive, energized movement demanding immediate action to address the climate crisis. There are marches and events showing solidarity for the march in NYC that are happening around the globe and more locally in the Bay Area. If you can’t make it to NYC, please consider joining a local action. 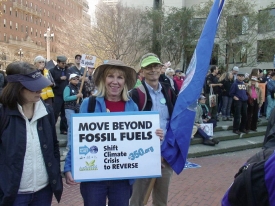 The NorCal People’s Climate March is happening in Oakland, September 21, at the Lake Merritt Amphitheatre, from 2-5 pm. Go to 350bayarea.org for more information.  Public transit serves the area.  (If you need to drive, contact info@greensangha.org for carpooling; be ready to walk at least as far as you would if you took BART/bus.)
For more information about the People’s Climate March and events happening near you, go to: http://peoplesclimate.org/march/
For information about the People’s Climate Train go to: http://peoplesclimatetrain.weebly.com/ or email Valerie Love at: vlove@biologicaldiversity.org
Helena Norberg-Hodge, Founder and Director, Local Futures: “It’s time we recognize that the driving force behind climate chaos is the globalizing economy, not our innate failings as human beings. The People’s Climate March represents an opportunity to look beyond individual consumer choices and come together to push for real policy change.” 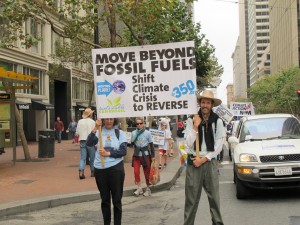 Michael Brune, Executive Director of the Sierra Club: “This isn’t just about getting a bunch of people to New York to march for an hour then go home. This is about making sure that the tipping point in the fight to halt climate disruption tips in the favor of the average citizen and clean energy prosperity, and that the world’s leaders see that the support to do so has reached a level that can no longer be ignored.”
Keya Chatterjee, World Wildlife Fund (WWF) director of renewable energy outreach: “For decades we’ve listened to government leaders at the UN voice their concerns about climate change. Next month, they’ll hear from tens of thousands of Americans demanding they finally turn that talk into action.”